Since the summer of 1996 the games were relived after 2.300 years, due to the efforts of the Municipality of Nemea and of the American School of Classical Studies.

It supposed to be a universal athletic event that connects the ancient culture regarding athletic games with our culture today.

People from the age of 12-88 can participate, regardless sex, skin color, beliefs and the competitive feeling that someone must be first, but they come to feel joy and respect to each other.

Everything takes place simple, strictly without extreme incidents.
Nemean games are a challenge and an invitation to the people nowadays. Nemean games were a Panhellenic event dedicated to Zeus and took place in Nemean valley.

According to a different story the games were dedicated to Hercules in honor for its victory against the Nemean Lion. Tradition says that this region was selected for the games because there the king Idrastos met the queen of Limnos Ypsipylis with her son Ofeltis. The king led them to a spring with water nearby because they were thirsty. But a snake bit Ofeltis and he died.

Nemean games take place every two years in the sacred place of the temple of Zeus, where there were a stadium and a race-course.

The games lasted for many days and there was ceasefire. After the sacrifice to Zeus, it was the athletic and horse-riding games’ turn. For the athletic games there were three categories of participants, kids, adolescents and men. Furthermore, during the games some music and theater events were organized. The reword for the winner was a crown made of celery.

At first, agonothetes of the games were people from Cleones, because the games were taking place in their region. After 460 B.C. the Argives became the agonothetes.
Nemean games took place also in Megara, in Enta of Sicily and in Agxialos in Thrace. 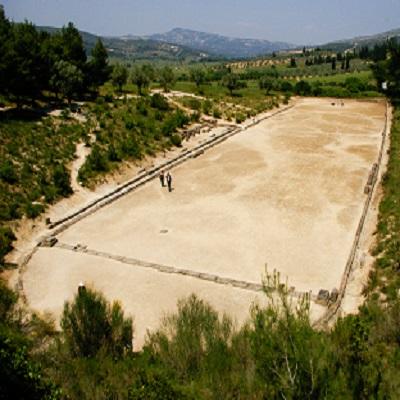 All visitors are encouraged to download our app, for free!

We use cookies to ensure that we give you the best experience on our website. If you continue, we’ll assume that you are satisfied with ιt.